Would You Give a Hitchhiking Robot a Ride Cross-Country?

Some robots are programed to imitate artificial intelligence, or be the smartest Jeopardy contestant. Others try to fool people into thinking they are real people, and coerce them into giving up sensitive information. But some robots, like the hitchBOT, simply want to hitchhike a ride across Canada.

HitchBOT, a collaborative project by professors of McMaster and Ryerson Universities, is the subject of a social experiment geared toward studying the ways that humans and robots communicate with each other. Primarily, the test is judging whether or not a robot is capable of artificial intelligence and understanding human speech.

The catch? According to Entrepreneur, hitchBOT is made out of “an old bucket, pool noodles, solar panels, and a computerized brain.” It certainly doesn’t look like an artificially intelligent piece of machinery, but it has the capability to tell people about its creation and its mission. It can even answer questions about the people who made it. Plus, let’s be honest – a 3,700 mile long trek across Canada (Halifax, Nova Scotia to Victoria, British Columbia, to be specific) would be awfully boring without a way to speak.

As if that wasn’t enough to pique your curiosity, hitchBOT is also equipped with 3G wireless technology, GPS location tracking, and social media posting capabilities. The idea is for anyone curious about hitchBOT to track its progress through Twitter and Instagram, as well as through its live blog updates about where and what it has done. If it happens to be out of power on the side of the road somewhere (unlikely, due to its body being wrapped in solar panels), the loveable robot can be recharged in a car or electrical outlet. It comes with instructions on how to contact its family in the event that something were to happen to it or if it were to run out of power.

More information, including hitchBOT’s current location and mission status, can be found on its website. You can find out all you need to know about hitchBOT and those who created it.

What’s it like to travel with a hitchhiking robot? The general consensus on Twitter appears to be positive, with many of the people hitchBOT has come into contact with taking selfies with it, and even buying the robot things like stuffed animals, new boots, and an umbrella. The robot itself also tends to respond with positive comments, thanking them for sharing their pictures and their time with it. HitchBOT seems to have a personality, occasionally posting tweets such as: 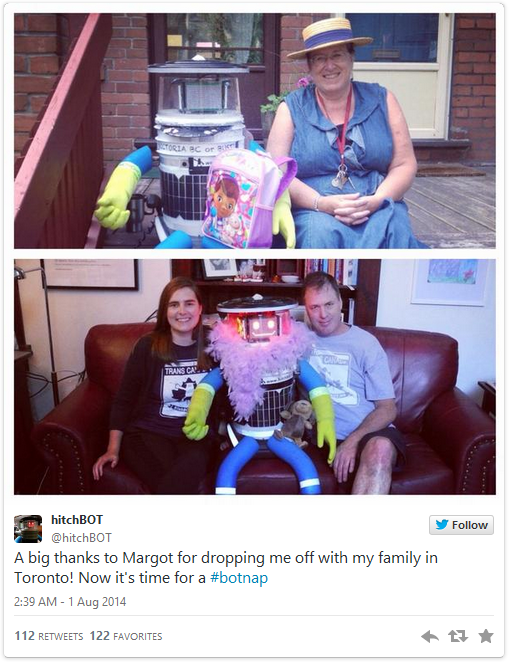 Or perhaps this one:

At this moment, hitchBOT could be in any number of places; a gas station, the side of the road, or charging inside a nice person’s home. All we really have to go by are its posts to social media and the GPS location posted on its website (currently in Toronto). Will it make it all the way to Victoria? That depends on how many people plan on giving him a ride. We’re sure some nice Canadians will be willing to go the extra mile to help a robot in need.

Would you give a random robot a ride across the country? Do you think it will make it to the Victoria, or will hitchBOT fail and get lost somewhere? It might even cross the border into the United States at some point. Let us know in the comments!